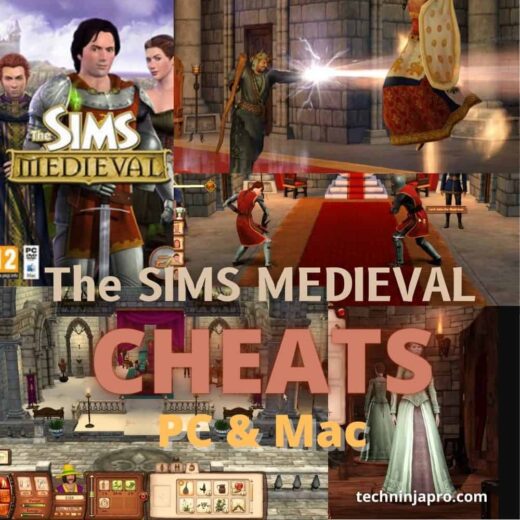 One of the most popular life simulation video games is The Sims Medieval. It was released on 2011, March 22nd by Electronic Arts. The initial release was meant for Windows and Mac, however, on March 25th, 2013, it was made available on the Nokia Lumia Windows Phone also.

Our most admired The Sims game was reconstructed and was taken back in time to get medieval, thus the game was called The Sims Medieval. This version of The Sims taken back to the Medieval Age comes with brand new graphics, state-of-the-art features, and several advanced ways to play. The Sims Medieval will allow you and give you the liberty to build up an entire kingdom, develop your own characters (heroes), and take you on various quests. This game offers drama and romance in a land full of adventure.

The one most familiar thing about The Sims franchise is that we can use the cheats codes to have some fun while we play the game. The cheats on The Sims Medieval Cheats can give the users and players those kinds of abilities in the virtual world which can give you the satisfaction of superhuman powers.

One thing that should be kept in mind is that these Sims Medieval Cheats do not work on Android and Apple phones, these are only compatible with PC and Mac.

How the Cheat Codes in The Sims Medieval are Activated?

Well, it rather depends on what kind of platform you are playing the game.

Once the Sims Medieval cheat codes console is activated, you can enter any of the below-listed cheat codes and press the Enter key for the cheat codes to get activated.

What are Testing Cheats? Well, they are the most powerful cheats that you can apply and enable in The Sims Medieval. You can apply the Testing Cheats in a considerably easy fashion and manner by performing a little/small editing in one of the game’s files.

In the previous Sims games, the TestingCheatsEnabled attribute was considered one of the most important elements in elevating the game to the next level. Enabling The Sims Medieval Testing Cheats can be done by:

After the testing cheats have been enabled, you can select your letterbox to bring up the cheat options by holding down the Shift key.

Now hold down the Shift key and select the option of Sims. The following list will appear:

If you are in Ground View Mode, you can press the Shift key and while you are holding it down you can pinpoint a spot which you might like to make your Sim teleport.

When it comes to forcing events and opportunities, you can select the workspace of your Sim by pressing and holding down the Shift key.

You can change the relationship levels, professional levels, and taits of individual Sims by pressing down the Shift button and Click on the Sim of your choice. This way you can change or promote a Hero in The Sims Medieval manually.

The Shift+Click cheat can help you do teleportation if you click on the ground and will allow you to build on any lot of your choice.

The Ctrl+Click on the Quest objective will automatically advance your quest.