Google Now Launcher was one of the most simple but popular launchers of all time. It was named as Google Now launcher because you can use Google now with it. You just have to swipe right. Moreover, the stock and clean look of this launcher made it popular among the Android users of all the manufacturers. But Google decided to move to the Pixel launcher with time and discontinued the Google now launcher. But the people like you, who were always interested in Google now like interface, may not like the new one. Thus we came up with launchers like Google now. These are the best alternatives to Google now launcher.

If you visit the Playstore off and on, you may have come across the top rated launcher, and that is Nova Launcher. It is one of the most potent Launchers with the most amazing features. Nova allows you to make customizations to a fantastic extent. You can make any changes to your android launcher from changing the font size to the size of the icons and also the customizations about how they look and move if you don’t like customizations, no need to worry about that because Nova launcher comes with unusual default settings that give you stock android look.

Apps on default are arranged in alphabetical order, but you can change that too. Apps can be slid in any direction, and on swiping right on the home screen, Google now does not open as default, but you can enable that feature too. You get almost all the elements in the free version of Nova launcher, but in case if you want more features like gestures and stuff, you can purchase the Prime version.

Here comes the fat guy of our list, by fat, I mean with more load. Go launcher comes with a lot of prior apps like cleaner and themes that you don’t need to install any more. But this launcher is not recommended if you are using a low-end phone. However, if you want launcher like Google now, you can do that with Go launcher. For that, you can turn off all the customizations and effects, and you can also activate the right swipe Google now feature.

It may take some course, but you can shred it enough to make it a Best Google Now alternative. However, you may have to compromise on the right swipe feature, and you can set that to double-tap.

Here comes the launcher that Google has made in the replacement of Google now. As the name suggests, Google made it for its pixel devices, but anyone can download and use this launcher. No doubt, Google Now was much more light and cleaner than this launcher, but this comes with extra functionality and features.

Pixel launcher gives a fresh look to your phone with the latest Android stock experience as this is the default launcher in the Android devices using stock firmware. It has several features like a clean look, known-snappy experience, customizable dock and app drawer and much more. The feature that we like about Pixel launcher is its design and UI.

Xiaomi, after the great success of Poco F1, launched the Poco launcher. And to be honest, it is also one of the best. With real stock experience, you can also customize it to a fully Xiaomi look. It comes with all the features found in any Xiaomi flagship. The feature that we like is the categorization of apps. Moreover, you can also hide apps.

For the nocturnals, this launcher also has a dark mode. Along with that, you can also change the themes in many colors.

You can also integrate the shortcut of Google now with Poco launcher. Thus Poco launcher is a complete package to fulfill your every need.

This one is made by one of the top tech giant Microsoft, and that is why it is different. Almost all the launchers in the list are similar in a way or another. But Microsoft launcher is a lot different. It gives a new look to your android with dozens of new features. Some of the significant features include Cortana assistant, wallpapers and gestures.

If you use Microsoft windows for your daily work, then this is the ideal launcher for you, as you can sync it with your PC, and can sync contacts, organizer and Cortana on as many devices as you want. You can also share data between your PC and phone. Other features include Microsoft apps, of course. 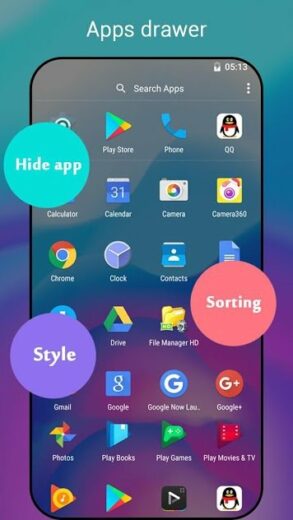 It is a bit of fancy launcher, and you may skip this if you are a fan of simple looks and no customizations. However, you can make customizations up to many aspects like sorting the app drawer, changing the icons and their transitions style and much more. The dark mode is also available in this launcher. Moreover, it comes with a battery app to save battery and free RAM.

The P is derived from Android version 9.0. So, if your device has a lower version of Android, then you can install this launcher to enjoy the Android 9.0 experience.

This one also has the same functionality as Microsoft launcher, but not clean like that. You get a screen in which you can manage your daily tasks, watch the news and your regular time on the phone. Its significant features include smooth interference, thousand of wallpapers and themes and a lot of customization for a new look every day.

Last but not least, this launcher is very much similar to Google now. It is not the launcher with Google now, but you can download and install an add-on if you want to use the Google now feature the same as you used to use on Google now launcher.

The look and feel of lawnchair launcher are similar to the stock Android. However, you can make a lot of customizations to the app drawer, icons, and transitions.

Verdict about Launchers with Google Now

Above are the launchers with Google now feature, but you may get confused about getting the exact launcher that meets your needs. So to solve this problem, you may consider your requirements first, then you have to choose one from the above. For example, if you want custom themes, icons, and other customizations, then Nova launcher is your buddy. But if you want some new looks with a day planner, then Microsoft launcher is a launcher that you should try, you get to sync your PC with that too. But if you like fancy wallpapers, then Apus and Super P launchers can make you happy.

If you have any questions, please ask in the comments section.

Latest Articles for You!