How to improve your guitar playing with your computer? 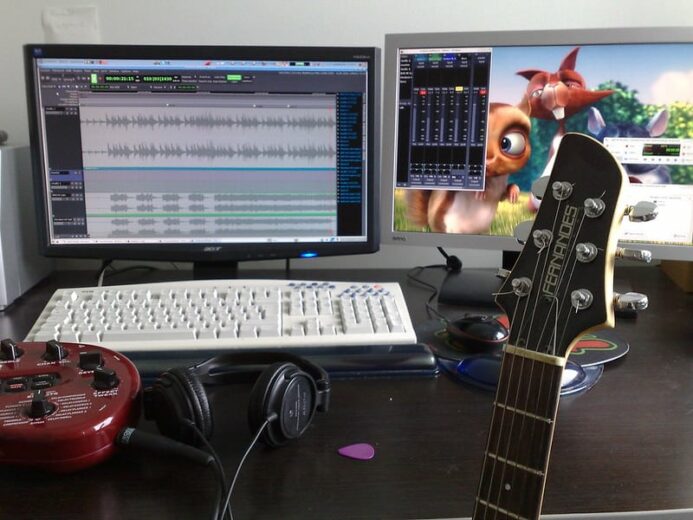 When I picked up my first guitar back in the 80s, there were three ways to learn – pay money for lessons, read a bunch of guitar books and hope you’re executing things right, or find the local guy who could play the guitar and get him to show you a few tricks.

In the intervening 40 years, as with everything else, so much has changed. Nowadays you can learn everything you need to know from YouTube, and even better, with the proliferation of affordable low latency audio interfaces, you can turn your computer into a guitar workstation and advance in a month as much as it used to take a year.

Every musician knows that The Beatles recorded all of their classic records on four tracks, and for many musicians in the 80s and 90s, the Tascam and Fostex cassette four track machines were an amazing tool for recording demo ideas at home (I even recorded a few vinyl records on mine back in the day).

However, it’s 2021, and with a good interface and some DAW software like Cubase or even Reaper, you can set up your laptop as a portable recording studio to allow you to record your musical ideas pretty much anywhere.

Nobody bats an eyelid when they see someone sitting in the park playing the guitar, but if you want to get a change of scenery to help you breathe new life into the songs you’re working on, you can easily take a USB powered interface like the Focusrite Scarlet series along with your guitar and laptop, load up an amp simulator in your DAW, and jam out wherever you like. Gone are the days of needing a 200lb desk along with a 50lb guitar amp, you can do it all with your laptop.

The Power of the Simple Metronome

Most piano players get their start running scales to a metronome for hours on end, building up muscle memory as well as their musical ear by playing the same succession of notes over and over and over.

On the other hand, for many guitarists, the thought never occurs to them. Typically, a guitarist will find a scale online, play through it a few times, think “yeah that seems straightforward”, and then move on to the next thing – never building that muscle memory that you get from laboriously playing a scale over and over.

However, there’s another aspect to this – one of the most important skills to have as a musician is timing, and not just in terms of when to come in. If you have a solo section in a song where the rest of the band stops and it’s down to you to keep the rhythm going, you need to have great timing to ensure things don’t suddenly speed up or slow down.

For this, learning to play to a metronome is incredibly powerful. The simple act of playing to a click, be it through using Google’s built-in metronome or your DAW’s click track (or even a standalone product like Polynome, though that can be overkill), forces you to internalize time in a way that you won’t get from playing with a drummer or especially alone.

You can also take a section of music that you find you always make mistakes with, slow it down until you can play it perfectly, and then gradually increase the tempo on the metronome until you are back up to speed, but error-free.

Which brings me to my next point….

Slow is Smooth, Smooth is Fast

The key to playing fast is to play slow. Sounds crazy, right?

The number one tip that shredder guitarists give to people who want to learn to play lightning-fast guitar is to slow down. You have to get your technique perfect, smooth and effortless at slow tempos in order to be able to speed it up and play a blizzard of notes without falling all over yourself.

This is where your computer becomes invaluable. When I was learning to play the guitar, I would have to rewind my cassette tapes over and over to try to figure out what I was hearing blazing past. Nowadays, you can just slow the song down without it even changing pitch.

For example, on most DAWs you can get plugins like Elastique that will allow you to take whatever tracks are loaded up (such as an MP3 of a song) and slow them down while maintaining the song’s pitch and avoiding having them become unusable with audio artefacts.

By the same token, on YouTube, click the gear icon, then “playback speed”, and then your choice of speed right down to 0.25.

This allows you to take any song that would be impossible to you at full speed, slow it down to figure out what’s being played, get all the notes in the right places with your fingers, and then gradually speed the song up until you’re breaking out those speed runs without breaking a sweat.

Jamming with a virtual band

Lately, this has become my favorite way to practice with my computer.

There are a million backing tracks on YouTube to allow you to take your latest scale and improvise a solo over top. If this sounds good to you – you’re not alone. A simple search for “A Minor Blues Backing Track” gives you a handful of videos in various blues styles that have a combined viewership of over fifty million plays – and that’s just the first five or six.

However, I like to take things a step further.

Thanks to the massive popularity of games like Rocksmith, Guitar Hero and Rock Band, it’s shockingly easy to get the basic tracks of many songs (and entire albums) on YouTube. You can then load these tracks into your DAW and set about creating your own guitar tracks, adding an extra element to just learning how to play along.

For example, I recently downloaded Dave Grohl’s drums and Kurt Cobain’s vocals for several songs from Nirvana’s Nevermind, and then set about recording my own bass and drums.

Aside from being a lot of fun, it’s a great opportunity to get a feel for how all the different pieces of a song fit together, and it gives you a chance to build your guitar chops by having to keep up with the band at full speed, without the benefit of the original guitar tracks to hide your mistakes.

Get it On Paper

One of the best skills you can pick up as a musician is to learn to read music. However, learning to read music from a book can take a long time – typically it involves creating your own transcriptions in order to internalize which notes are in which spots on the page.

However, using software such as Arobas Guitar Pro, you can watch the notes on the tab light up as they’re played, giving you an instant feel for where each note is, making the journey to being able to sight read music a matter of weeks instead of months.

This also opens you up to the entire world of online guitar tabs. While of course you probably won’t find a tab for that Austrian grindcore band you just heard of, sites like Songsterr have tabs for millions of songs, and many of them have separate files for rhythm and lead guitar parts, as well as bass, drums and vocals.

If you want to take your Songsterr tabs one step further, you can load them into Guitar Pro and slow them down to your heart’s content.

While all of the above will get you moving and grooving in record time, there is of course the elephant in the room that I haven’t gone into too much detail about – YouTube.

The entire history of guitar innovation, theory and practice can be found on YouTube, though these days many people are finding themselves shunning it as a learning tool.

Why? One of the main reasons is that many people find that YouTube sets them up for failure. The YouTube algorithm is designed to funnel you into a wormhole of content that makes you forget what you sat down to do – you start out with your “A Minor Blues” backing track, and ten minutes later you’re watching the guy from Queens Of The Stone Age on Joe Rogan.

To keep from derailing practice sessions, many people are giving up on YouTube entirely and sticking to books, and that brings me to the second reason – YouTube videos are always designed to be standalone entities that get clicks from people who are interested in that one topic. This means that if you want to get from place A in your playing to place B, you’re on your own trying to curate a learning path using multiple teachers.

On the other hand, if you pick up a book on the guitar style or technique you’re trying to learn, you get one person guiding you through it from point to point in an organized fashion, ensuring you stay on track and ideally reach your goal with minimum distractions.

My recommendation? Use your computer to improve your guitar playing – practice with a metronome, use backing tracks, record some covers, learn to read music – and as best as you can, avoid all of the pitfalls of having the internet at your fingertips to distract you and eat into your learning time.